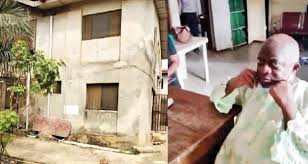 two siblings Saidat Kazeem and Fatimo Onakoya have been arrested by the Men of the Lagos State Police Command for allegedly collaborating with other family members to detain their father, known as Surajudeen Jaji, in a room for one year at his residence, No. 47 Maria Okor Street, Bucknor area of the Ejigbo Local Council Development Area of the state.

Muyiwa Adejobi,  the state Police Public Relations Officer, confirmed Saidat and Fatimo’s arrest on Wednesday after policemen attached to the Ejigbo Division accompanied by a member of the Committee for the Defence of Human Rights, Abdulganiyu Salaudeen, stormed Jaji’s house on Tuesday to rescue him from the room where he was being held in captivity.

The PPRO   stated that Saidat and Fatima would be transferred to the State Criminal Investigation and Intelligence Department, Panti, Yaba, for discreet investigation, while efforts were being made to apprehend their accomplices.

NEWSNAIJA learned that the septuagenarian was restricted to a room in his house by his children, who suspected that he was making plans to sell his property.

To prevent the 77-year-old from carrying out his plan, his children allegedly instructed his maid to prevent visitors from having access to him, but when questions were being asked about Jaji’s whereabouts, the children reportedly claimed that they were keeping him safe from contracting COVID-19.

Salaudeen in a statement said trouble started between Jaji and his family when a maid, identified simply as Adija, who was employed to cater for him and his wife, Rashidat, was fired by the children on the suspicion that she was having an illicit affair with their father.

Salaudeen said the children claimed that Jaji threatened to sell his property and to prevent him, they decided to lock him in a room on the pretext that he had lost his senses and was under a spell cast by Adija.

The children were said to have also seized Jaji’s phone to prevent him from contacting anyone, including Adija.

However, One of Jaji’s children,  known as Titi, had denied the allegation of detaining their father, saying, “I don’t know why she (Adija) is making false accusations to different people that we locked up our father. Why will we do such a thing to our father and why is Adija particular about our father? Our mum is also staying in the same house.”

Titi had directed our source to speak with the head of the family,  identified as Aliameen Onashokun, who confirmed that Jaji’s phone was seized to prevent him from contacting Adija, adding that the septuagenarian had disowned his wife and children because of her.

When Jaji was being rescued on Tuesday, he could be heard in footage saying, “I want my freedom, but I want an undertaking that my children will not step into this house until I am dead. They should also take their mother to their place.”

The police, Salaudeen, and the Chairman of the LCDA later took Jaji to a health center in Ejigbo for treatment.