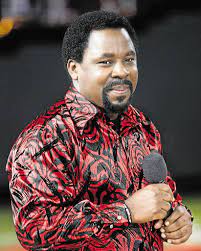 Did you know that Pastor TB Joshua stayed in his mother’s womb for 15 months before he was born?

He attended six colleges in less than one year due to a lack of sponsorship.

Though he did not complete his secondary school education.

The televangelist is one of the richest pastors not just in Nigeria, but the world.

His life was full of struggle, as he came from a poor family, during rain season he used to wash people’s feet on roads, just to gain a living.

He worked in poultry just to raise school fees.

He was such a humble soul who never gave up.

He started praying and fasting from childhood.

Whenever his mother was in debt, TB Joshua would go on the mountain and pray/fast.

Every time he would knock off from school, he would go to the prayer mountain and pray.

He was nicknamed Small pastor in the school attend.

One day, a mad person came to his(TB Joshua)’s school armed to his teeth!

Everyone one including the teachers and pupils ran for their dear lives, But to the shock of everyone the small TB Joshua walked directly to the mad man and said,
“Give me your knives, tools, etc, and leave this school now in Jesus’ name,” that’s how the mad man left the premises in peace like an Angel who had fallen from heaven on a sofa!.

One of his favorite quotes was, “Never allow your current situation predict your future, God’s time is the best!. Everything great starts small”.

Meanwhile, his birthday falls on June 12

Six days to go, that’s the day he will likely be put to rest.