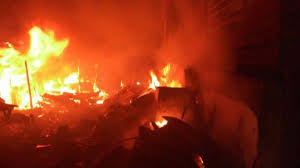 The Lagos State Police Command has arrested one Chima for allegedly setting ablaze his elder sister, identified as Victoria, at their place of residence by the CAC bus stop in the Okokomaiko area of Ojo.

Report gathered says the siblings were assisting their mother, who was cooking in the kitchen, when trouble started between Victoria and him.
It was learnt that the mother cautioned Victoria against cohabiting with men since she had a home, but an argument ensued between them and Victoria allegedly disrespected her in the process.
Chima, who got angered by Victoria’s response to their mother, reportedly grabbed a keg filled with petrol, hit his sister with it and the content spilled on her and their mother.
This was followed by an explosion and the mother and sister were burnt in the process.
Report says in a bit to rescue them, neighbor’s rushed them to a nearby hospital in Okokomaiko, from while Victoria, who sustained severe burns, was referred to the General Hospital in Igando.
However, Victoria died due to the severity of the burns, but the mother survived.
Reports gathered from punch metro says after Chima realized what he had done, he attempted to flee from the scene of the incident, but he was apprehended by youths in the community, who heard the distress call of the victims, just as smoke was coming out from their kitchen, the neighbors reportedly extinguished the fire and handed over chima to the police.
Bala Elkana, The state Police Public Relations Officer, confirmed Chima’s arrest, adding that during interrogation, he confessed to setting his sister ablaze for disrespecting their mother.
The PPRO says the case has been transferred to the State Criminal Investigation and Intelligence Department, Panti, Yaba, for discrete investigation. He will soon be charged. Investigation is ongoing.