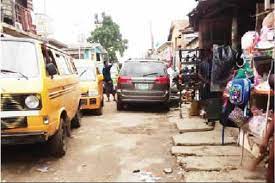 A special needs boy, simply identified as Kelvin, has lost his life after allegedly drinking a substance suspected to be kerosene in the Ikeja area of Lagos State.

NEWSNAIJA gathered that Kelvin obtained the bottle of kerosene from the Jesus and Augusta Heritage bar located on Tonade Street in Ikeja.

It was learned that whenever workers at the pub were not around, Kelvin usually assisted the owner, identified simply as Aunty Augusta, to clean the tables that customers use.

A shop owner in the area, who gave his name only as Johnson, told our reporter that Kelvin offered to assist the owner of the bar in order to earn money for his upkeep due to lack of parental care, adding that the effect of the kerosene he allegedly consumed killed him.

Johnson said, “The boy had special needs; it was when I got to the shop this morning (Wednesday) that I heard that he had died. But there is a woman, who owns a bar in the area and always takes care of children.

He said “This woman didn’t employ the boy to work for him, but because his parents were not taking care of him, at times he used to assist the woman when her workers were not around.

“Yesterday (Tuesday), he saw a bottle with the content being kerosene, and he drank the kerosene. When people got to know, they quickly gave him palm oil and took care of him. He later stood up and was bathed.”

However,  Johnson, said Kelvin’s condition got worse the following day till he died, adding that people in the area had been blaming Augusta for his death.

He said, “He was still okay yesterday and this morning he started behaving somehow and the next thing we heard was that he died. So, people started pointing accusing fingers at the woman.

“The woman was just helping him; at times, the woman would give him money for transportation and feed him. The boy’s name was Kelvin and the owner of the bar is Augusta.

“The kerosene was kept somewhere and I don’t know what influenced him to drink it. The owner of the bar has informed her lawyers and they have gone to the police station.”