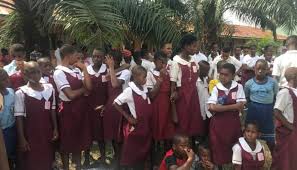 Female pupils of Universal Basic Education Junior Secondary School in Makurdi, Benue State capital were on Monday sent home when seven of them were attacked spiritually.

Our source who visited the school located at Nyinma Area of the state capital gathered that four of the female students were attacked spiritually on Friday while three others were attacked on Monday, make it a thing of necessity for the school authority to send home all the female pupils.

According to the headteacher of the school,  identified as Catherine Ahom, who later referred our source  to the Education Secretary, the pupils experienced a seizure and complained of chest pain, “from there, they will fall down and some others would be running around.”

The spiritual attack, according to the headteacher is called “Iyor genen” in Tiv language.

When contacted, Patrick Aese,   the Education Secretary, Makurdi Local Government Area Education Authority, who dispelled fear, said the attack was not infectious but a mere spiritual attack that is rampant in a part of Tiv land.

According to Aese, “It is a spiritual matter. Just go back to school tomorrow, those children will be back to normal.

“If it were to be at the village, traditionalists know what to administer and within one hour they become normal. They know how they control it to make it subside.

“It is very common here in Tiv land. There is a particular group of Tiv that is mostly known for it (spiritual attack) but to other places it is alien.

The Education Secretary further said, “Within the area where it happens frequently, we don’t fear it. We know the limitations and how it can be contained, it is not transferable. The thing started many years ago, our forefathers inherited it.