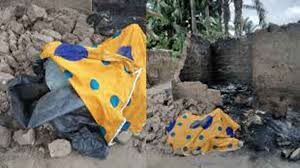 A man identified as Aondona Yaga,  a local government worker in Benue State, has allegedly set himself ablaze.

A resident, who identified himself simply as Nath, said the incident happened on Tuesday.

Aondoana was said to be a casual worker of the Gwer East Local Government Area until his death.

Nath said, “What we heard was that the deceased took ill and was looking for money to treat himself.

“We learned that as a casual worker, he and other colleagues had yet to be paid their allowances for some time now and when there was no way out, he decided to end it all by setting himself ablaze.”

The deceased was said to be living in a thatched house in Aliade.

Austin Nemba,  the  Vice Chairman of the council, described the deceased as a hard-working man.

Nemba,   said, “The young man did not show any sign of illness. He was a casual worker in the local government.”

“But as a hard-working person, I used to give him money regularly,” he added.