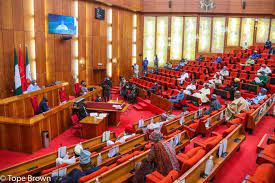 The Senate President, Ahmad Lawan, pledged yesterday that the Senate would intervene in the lingering dispute between

the federal government and the Academic Staff Union of Universities (ASUU) by bringing the two parties back to the negotiating table.

to resolve all outstanding issues with ASUU or face industrial action.

Lawan made the promise to NANS officials who were led to his office by a concerned Methodist Bishop, Dr. Sunday Ndukwo Onuoha.

Sunday Asefon, the NANS President, spoke on behalf of his colleagues,

lamenting their continued stay at home and disruption of their academic program,

and urging the Senate President to intervene in the dispute between the federal government and university teachers.

The Senate President responded by expressing dissatisfaction with the turn of events,

recalling that the Senate had intervened in the past before everything broke down again.

He did, however, promise that the Senate would intervene again and expressed hope that the issues would be resolved soon.

In response to the students’ threat to disrupt political activities, Lawan urged them to stay on the path of consultation and avoid confrontation.

Is there hope yet or is this another ‘mouth off’ by the senate? These are the questions on the lips of Nigerian citizens as they hope for the best.