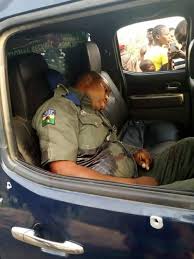 Gunmen, went on rage, robbed a bullion van belonging to a bank, and killed a police officer and two traders on the Ubulu-Okiti Road in the Aniocha South Local Government Area of Delta State.

Eyewitnesses in the community told our source that the gunmen intercepted the bullion van on the road and overpowered the policemen escorting it.

One of the sources stated, “What happened was like a war zone; the van was accosted by the gunmen, who were shooting extensively and the police responded.

The witness said “The gunmen overpowered the policemen and killed an officer and two female traders; they emptied the bullion van, took all the money, and escaped successfully. There was panic in the community as a result of the shooting.”

DSP Bright Edefe,  who is the state  Police Public Relations Officer when contacted confirmed the incident but said the details had yet to be discovered.

Edefe,  said, “Yes, there was the robbery of a bullion van at Ubulu-Otiti yesterday but am yet to get the details of the operation.

The PPRO said, “I can’t tell you now that an officer was killed in that operation because we have not got the complete details of the operation.”