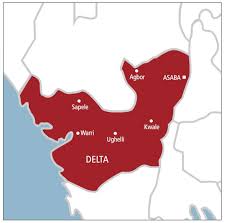 Delta State Police Command has confirmed the killing of a 52-year-old man, identified as Prince Muvi Unagha, by gunmen suspected to be upset members of the disbanded community vigilante who reportedly caused a commotion in Evwreni community, Ughelli North Local Government Area of Delta State on Saturday.

DSP Edafe Bright, the acting Police Public Relations Officer for the State Command, told journalists on Sunday that “it’s true that a young man was shot dead yesterday at Evwreni.”

Furthermore, the police spokesman said, “As we speak, the police are on the trail of the suspects, in order to bring them to book.”

While noting that no arrest has been made in connection with the crime, the Acting PPRO, however, assured that operatives of the Command “will continue to monitor the situation of things and keep the public updated.”

He said “It is our hope that justice is served and seen to be served in the matter,”

NEWSNAIJA learned that some hoodlums suspected to be angry members of the disbanded community vigilante, on Saturday at about 4.00 pm, captured a popular drinking joint in the community and started shooting sporadically at those suspected to be their enemies.

It was further learned that not less than four cars were reportedly damaged by the rampaging gang.

According to sources, the incident occurred as some community youths gathered at the drinking joint. Suddenly, three cars in a convoy pulled over, and their occupants opened fire on those at the joint, prompting everybody to scamper for safety.

In the resulting uproar, Unagha who was on a commercial motorcycle within the surrounding quickly asked the okada rider to by-pass but unknown to him, some of the attacking gunmen who were also riding bikes followed and shot Unagha on the leg.

subsequently, Unagha was said to have been rushed to the ‘A’ Division, Police Headquarters, Ughelli to acquire a treatment authority letter, and from there to the Central Hospital, Ughelli where he eventually died, due to over bleeding.

The death of Unagha was said to have further heightened tension in the Evwreni community, leading to many residents moving out from the community for fears of both further and reprisal attacks.