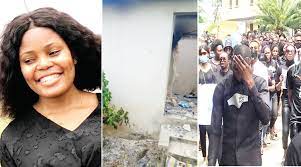 Youths from Nnung Ikono Obio in the Oruan Local Government Area of Akwa Ibom State, on Tuesday, stormed the family house of Uduak Akpan, the prime suspect in the murder of the jobseeker,  identified as Iniubong Umoren, who was raped and killed and vandalized it.

NEWSNAIJA learned that the youth took the action after setting ablaze the security post of the one-storey building.

Sources told one of our correspondents that the youth went away with all the properties in the building and took the father of the suspected killer to the police.

He said “They broke the windows and the glass doors with pebbles and sticks, and carted away everything in the building,” the source said.

Iniubong was allegedly lured, abducted, and sexually abused to death by Akpan, who hails from the local government.

The youth explained that their action was predicated on the alleged complicity of Akpan in the murder of the 26-year-old graduate of Philosophy from the University of Uyo.

Speaking with one of our correspondents on the phone, the youth President, Sunday Essien, expressed disappointment at the alleged action of an indigene of the community.

Essien said “There is nothing happening apart from what you have already heard. It’s not good for the boy to kill a fellow human being. We don’t know that that was what he had been doing. That is the reason we took this action,”

However, he exonerated the Chairman of the local government council, Mr. Iniobong Ekpenyong, saying he played the role of the chief security officer of the council by calling the police to arrest the suspect.

Similarly, students of the Faculty of Arts, University of Uyo, who were dressed in black outfits, on Tuesday, protested against the gruesome murder of Iniubong and demanded that justice be served.

The students walked around the school campus in a solemn procession and called on the wife of the state governor, Mrs.  Martha Udom Emmanuel, to play her motherly role by ensuring that justice was achieved.

Mr.  Unyime Anietie,   leader of the 2015 set of the faculty, vowed to make sure that their colleague’s death would not go in vain after laboring so hard to go through school.

Anietie,   stated, “Iniubong Umoren did not deserve to die; she didn’t have to die after all the stress she went through in school. We want to appeal to Mrs. Martha Emmanuel to use her pet project, Family Empowerment, and Youths Re-orientation Path-initiative to make sure that the perpetrators of such acts are brought to justice.

“If this is what it will take for rape and all other forms of gender-based violence to end, then we appeal to all stakeholders to see to the end of this case.”

Prof. Joe Ushie, the  Dean, Faculty of Arts, UniUyo, said Iniubong, whose result he recently signed, paid the supreme price as a victim of a world that was morally dead.

Meanwhile, the House of Representatives has condemned the rape and gruesome murder of Iniubong.

The House, at the plenary on Tuesday, described the incident as “barbaric, inhuman and despotic,” and mandated the acting Inspector-General of Police, Usman Baba, to “immediately commission and take over the investigation and prosecution of the perpetrators of the heinous crime.”

The House also mandated the IG to “ensure the protection of her family members from harassment, intimidation, and harm.”

The House Committee on Women Affairs and Social Development was also asked to follow up with the investigation and prosecution, ensure compliance with the resolutions and report back to the chamber.

The resolutions were sequel to the unanimous adoption of a motion moved by the lawmaker representing the Ukanafun/Oruk, Anam Federal Constituency in Akwa Ibom State, Mr. Unyime Idem, titled: ‘A Call for Comprehensive Investigation, Prosecution and Punishment of the Perpetrator(s) of the Kidnapping, Sexual Assault and Heinous Killing of Miss Iniubong Ephraim Umoren and the Need to Protect Her Family Members’.

Similarly, the Chairman of the Uruan Local Government Area of Akwa Ibom State, Mr. Iniobong Ekpenyong, has faulted the prime suspect’s confessional statement to the police, saying it was intended to smear his hard-earned reputation.

Akpan, who was arrested in connection with the murder of the 26-year-old Iniubong, had in his confessional statement claimed to have communicated with the council chairman about the crime before escaping to Calabar, Cross River State.

“The suspect confessed to have told the council chairman of his atrocity before escaping to Calabar and was never at any time handed to the police by anyone” the police spokesman had said in a statement.

Reacting to the police statement on Tuesday, Ekpenyong claimed that his intervention aided the arrested of the suspect.