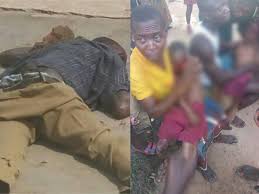 The Ebonyi State Police Command, on Thursday, said three of the five schoolchildren crushed to death by a truck conveying water at Onu-Nworie Egu village, Oshiri, in the Onicha Local Government Area of Ebonyi State, on Tuesday, were of the same parents.

The victims were pupils of St Michael’s Schools, Oshiri.

Mrs. Loveth Odah, The Police Public Relations Officer in the state, who spoke to our source in Abakaliki on Thursday, added that Philip Maku,  the Commissioner of Police, held a two-minute silence in honor of the victims before the commencement of the day’s work.

The PPRO added that the victims were buried on Tuesday, when their families came and indicated interest to do so, said the command frown on the resort to jungle justice by the villagers in handling the matter.

“The victims were buried immediately that Tuesday. Their families came and requested that they be buried because they were so young to be kept in the mortuary. The driver, Innocent Ewa, and his assistant, Denis, have already been killed and so, there is no case again.

“This is jungle justice and it’s not good for our society. In 2020, COVID-19 came and claimed as many lives as possible. Thereafter, #EndSARS came, and we as a people have lost many lives and property. This is not good for us. We have lost so much this year and it is advisable that we try not to allow this to continue. Let’s not lose more lives again.”

It was the driver who ran away from the scene of the crash, but angry youths in the area chased and caught up with him at Onicha Igboeze and lynched him and his motor boy.