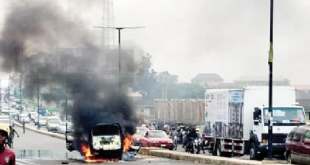 An angry mob has set a 14-passenger bus on fire after the driver rammed into a motorcyclist at the Idi Ape area of Ibadan, Oyo on Wednesday.

NEWSNAIJA learned the motorcyclist died on the spot with two other persons sustaining varying degrees of injuries.

The bus driver, who fled the scene immediately after the crash occurred, was said to have driven against the traffic and rammed into the oncoming motorcycle and another vehicle.

It was gathered that the driver of the vehicle, which was laden with kegs of vegetable oil, fled the scene to escape being lynched.

Officials of the Oyo State Security outfit, Operation Burst, were mobilized to the scene to restore normalcy.

Eyewitnesses said sympathizers made frantic efforts to save the motorcyclist, but he died soon after.

The bus was set ablaze soon after the two other victims were rushed to the hospital, thereby resulting in heavy gridlock in the Iwo Road-Idiape area of the metropolis.

Some residents of the area blamed the accident on the bus driver for violating the traffic rule.

Officials of the Oyo State Fire Service were seen at the scene, while the wreckage of the vehicle was moved away from the road.

Mrs. Uche Chukwurah, the Sector Commander, Federal Road Safety Corps, Oyo State Command, confirmed the crash to journalists in a telephone interview, stating that the commercial motorcyclist died as a result of the impact of the accident.

Chukwurah said, “Yes. I am aware. Yes, it was fatal. One person died,”.