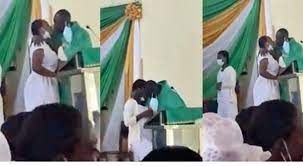 An Anglican priest identified as Obeng Larbi  in Ghana has been filmed kissing three female students during church service.

The shocking clip which has been circulating on social media shows the priest,  stretching forth his head from the pulpit to kiss the women in their mouth, one after the other, while the congregants kept shouting.

The incident happened  at St. Monica College of Education   in the Ashanti region.

A Ghanaian news website, Star FM, quoted  a female student of the college as saying that the school authorities were looking for the student who recorded and shared the clip.

The unnamed student said the priest was kissing the students as “a show of appreciation”.

However,  the  report did not mention what the priest was appreciating the students for.

the student said “The father in the video kissing the students didn’t know we were going to post the video,” .

“We were not comfortable with the situation, that’s why we were shouting. This is the first time he’s doing this. He gave the school chaplain a kiss and then did the  same to the three female Bible readers. The third girl the father kissed is a virgin and that’s why she gave her cheek to the father to kiss but he forced and kissed her lips.”

Meanwhile, The Anglican Church has stated that  they were “saddened” by the incident.

The church in a statement said , we are   deeply saddened by the news and wish to state expressly that thorough investigation has immediately begun  into the matter and the action of the said Priest would be dealt with in accordance with the norms and values of the Anglican Communion where morality is extremely revered in the Church,” .

The statement was signed by George Dawson-Ahmoah, the executive director to the Metropolitan Archbishop of Ghana.

“Meanwhile, all efforts are being made to engage the students concerned through counselling sessions to avert any psychological issues that may arise as a result of the viral video,” the statement added.