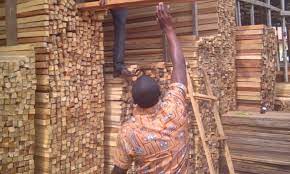 Traders, trading at the Umuahia Modern Timber Market, on Monday, burnt down office the  Vigilante Service in the market.

It was learned one Hilux van was also burnt down by the traders.

A source, who spoke to a reporter, said the incident was a result of a disagreement between the traders and the Abia State Board of Internal Revenue, which enforced an annual fee of N18,000 on the traders without prior information.

The source said that the board had on Sunday sealed off the entire market only for the traders to come on Monday to meet it under lock and key with a retinue of members of the AVS, who ordered them to close down their shops.

NEWS NAIJA learned that the traders refused to pay the fee, arguing that it was too much and the imposition was without prior notice.

The source said “The Abia State Vigilante Service, popularly called Bakassi, came to the market to affect the order given by the revenue board, which resulted in a clash,”

In an attempt to enter into the market to open their shops, a member of the vigilante shot one of the traders, popularly known as Indomie, alongside five others.

The vigilante’s action angered the traders, who fought back by burning the AVS office and its vehicle.

The injured traders were rushed to the Federal Medical Centre, Umuahia, where they were treated and discharged.

Confirming the incident, Geoffrey Ogbonna,   the Police Public Relations Officer in the state, said, “All the injured have been treated and discharged.”

All attempts to get any official of the Abia BIR to comment on the incident proved abortive.

However, no life was lost during the incident as confirmed by a member of the AVS team.