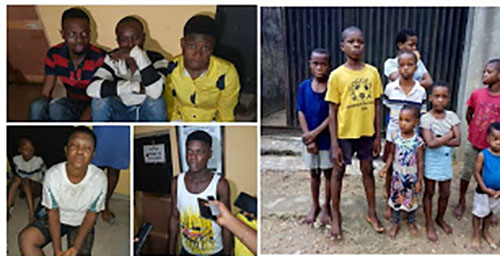 Among those rescued was a 15-year-old girl said to be pregnant.

According to Haruna Mohammed,  the state Police Public Relations Officer, the children were stolen from different states adding that a five-man child trafficking syndicate has been arrested.

He said preliminary investigation revealed that the children five boys and three girls were stolen from Rivers Bayelsa, Imo, Abia, and Anambra states.

He gave the names of the suspects as Joy Lazarus, Janet Gideon, Gideon Godspower, Wisdom Ndubuisi, and Chukwudima   Nwogu.

The Anambra state PPRO  said, “The suspects voluntarily confessed that they usually steal the children and bring them to their sponsor, one Mrs. Joy Lazarus of Urata in Abia State, who allegedly buys the children at the rate of between N200,000 and N400,000.

Further findings revealed that in addition to child stealing and trafficking, the same sponsor, Mrs. Joy Lazarus, also lured underage girls into getting pregnant after which she would buy the children from them immediately after delivery.

He said, “So far, eight children were rescued, including a year-and-half-old baby recently snatched from the parent at gunpoint in Orlu, Imo State, as well as a 15-old pregnant girl.”