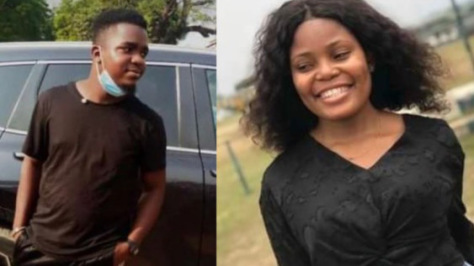 The Akwa Ibom State Police Command has arrested a suspected fake recruiter, identified as Uduak Akpan, for allegedly raping and killing a jobseeker, Iniubong Umoren, in the Airport Road area of Uyo.

NEWSNAIJA learned that Umoren had on Thursday gone for a job interview after Akpan allegedly lured her with a fake offer on social media.

However, a few minutes after she sent a message to her friend, Umoh Uduak, about her leaving for the venue of the interview, she became unreachable.

Uduak, who raised the alarm on her Twitter handle @UmohUduak1, alleged that she heard the victim screamed from a one-second voice note she sent, adding that efforts to reach her on the telephone proved abortive as her calls were not picked before the mobile phone became unreachable.

Following the #FindHinnyHumoren hashtag created on social media, Akpan’s identity and the location were uncovered and when he got to know that he was been looked for, our correspondent learned that the suspect absconded from his home.

It was gathered that the victim was buried in a shallow grave after Akpan allegedly raped and murdered her.

Responding to the matter, the police through its Twitter handle, @PoliceNG, stated that two suspects had been arrested.

It stated, “Anti-Kidnapping Squad of Akwa Ibom State Command is already investigating this case. As a matter of fact, two suspects have been arrested. Further updates will be provided as the investigation progresses.”

Odiko Macdon,  the state Police Public Relations Officer, who stated in a statement on Sunday that Akpan had been arrested, said the suspect confessed to have raped and murdered the victim.

“On April 30, 2021, the command received a report on the disappearance of the victim. Following available leads, men of the Anti-Kidnapping Squad of the command, led by CSP Inengiye Igosi, consolidated on the initial progress made by the DPO, Uruan, SP Samuel Ezeugo, and arrested the perpetrator, who confessed to having lured his victim to his house on the pretext of giving her a job, but ended up sexually and physically assaulting her, which led to her death.

“To cover his track, he dragged and buried her in a shallow grave in his father’s compound. The deceased has been exhumed and deposited at UUTH (University of Uyo Teaching Hospital) for autopsy. The suspect confessed to have told his local government chairman of his atrocity before escaping to Calabar and was never at any time handed over to the police by anyone.

“The suspect is a confessed serial rapist, who has owned up to raping other victims. He will be charged at the conclusion of an investigation.

Amienghene Andrew, the Commissioner of Police, has called on youths and jobseekers to be wary of the activities of scammers and other men of the underworld.”

Meanwhile, emotions were high on Sunday at the state police headquarters, Ikot Akpan Abia, Uyo, as concerned citizens protested the death of Umoren.

MacDon, while addressing the protesters, said that the principal suspect, Akpan, had confessed to the crime.

He assured the crowd that the investigation would be discreet and unhindered. The remains of the victim have been deposited in the University of Uyo Teaching Hospital mortuary for autopsy,” the police spokesman added.

After the news of her death broke out, Nigerians called on the police to ensure that justice was served.

The former Senate President, Bukola Saraki, urged the police to bring the perpetrators to justice.

He wrote, “I’ve been following the #FindHinnyHumoren hashtag closely over the past couple of days and I am extremely devastated that young Miss Iniobong Umoren, who simply set out to find a job, was raped and murdered.

“At this particularly difficult time, my prayers are with her family and all her friends who kept this topic on the front burner over the last couple of days. I hope the perpetrators of this despicable act are swiftly tried and sentenced.”

A Twitter user, Mascott Odenigbo, while reacting to the death of the victim, proposed a long jail term for the suspects.

He tweeted, “@PoliceNG we are counting on u guys to prosecute and ensure that boy gets a maximum jail term. A 70 years jail term would do. Please don’t disappoint this girl, her family, and Nigerians.”

Another Twitter user, @Aaron_Magook, wrote, “I was so emotionally invested in finding this girl safe and sound. Why does God allow such things to happen to innocent people trying to survive the world? Oh God, this is going to wreck me emotionally and mentality even thou I didn’t know her. RIP Hiny #FindHinnyHumoren.”