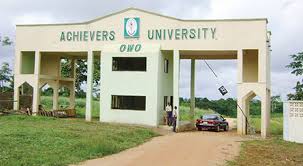 The Achievers University, Owo, Ondo State on Monday said it has expelled one of its students in the Department of Nursing Science over the alleged involvement of her mother in an act of indiscipline.

The institution also said the two-year tuition that had been paid by the 200-Level student was returned to her after the expulsion.

The Pro-Chancellor stated that, prior to the action of the university, the mother of the expelled students had insulted him (Ayorinde) severally via WhatsApp messages, protesting why her daughter should have three carryovers.

He said, “Remember our middle name is integrity. We want to appreciate our parents for trusting in the school. You have a choice to go elsewhere. An incident happened two days ago.

“A 200 Level student in Nursing Science Department had three carryovers. I don’t teach you, I only superintendent over the council, and our responsibility is to provide all things you need so that you can do well.

“She used unprintable names on me. And we have asked the student to withdraw for indiscipline of her parent. Not only withdrawal, but I have also asked the bursary to return all her two-year tuition.”