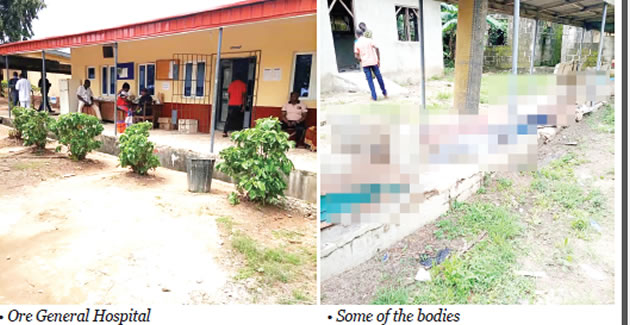 News reaching us says the Ore General Hospital, Ondo State, has hundreds of corpses piling up on the premises of the hospital’s mortuary, which may lead to an outbreak of epidemic in the environment.

Newsnaija learned from recent visitors to the public hospital that bodies of men and women were openly placed on corridors where they were beaten by the rain.

Horrifying photos and videos of the mortuary surroundings obtained by our source showed some bodies were on the pathways, while a few were covered with iron sheets.

Concrete blocks were used to demarcate the placements of some of the remains.

Inside a room that appeared like an office, corpses of many people, including women, were placed on the floor.

Two standing corpses in the room had become skeletons.

Newsnaija learned that the mortuary had two small generators kept in a shade.

Our source, who visited to collect the remains of a neighbor, lamented the condition of the mortuary.

He stated that the facility lacked proper embalming tools, adding that the morticians said the general hospital was not supported with funds.

He said “My neighbor died in an accident while coming to Lagos and his remains were brought to the mortuary by officials of the Federal Road Safety Corps.

He further stated “We came here to pick the body and what we saw was unbelievable. The corpses are just too many. Those washing them said they could number close to 300 and they were abandoned by their families for more than a year. They only embalm them on the floor so that they will not smell,”.

Another visitor said there was an uncompleted building where another set of corpses were kept.

He explained that the mortuary workers said the hospital was planning a mass burial for some of them.

He said “a relative of mine died and his body was deposited here. I was called to come and see where his corpse was kept.

He said “as I was walking to the mortuary, someone called my attention to the bodies on the floor and that I was beginning to step on them. I was in shock.

He added by saying “Some of the bodies are kept where sun and rain beat them. Some are covered with clothes and others with iron sheets. A wrapper they probably got from an accident scene was used to cover a few others. The bodies are not fresh. They are becoming rotten on the floor where they are kept. It is not a good experience at all,”

Dr. Akinyele Semudara, The Chief Medical Director of the hospital, declined comment, saying he could not speak to anyone on the phone.

Ajibayo Adeyeye, the Ondo State Commissioner for Health, said workers at the hospital were overwhelmed due to the number of bodies brought to the mortuary.

Adeyeye,  said, “I was also at the place yesterday and I was confronted with the same situation. We are aware of it. The problem is a result of the location of the hospital; it is close to the highway. A lot of accident victims get dumped in the hospital. You’ll find a situation where the police just bring corpses, drop them, and go away.

“Corpses that are products of accidents are coroner cases. That means they cannot be buried without an autopsy or the police bringing an order of the court.

“In the midst of the hospital coping with people that are still alive, the workers easily get overwhelmed by these corpses. However, we have been appealing to the police authorities to take care of their cases so that the bodies can be buried.”

He said conducting a mass burial was also challenging due to the problem of getting land without resistance from people who owned land in the area.

The health commissioner noted that the state might create a crematorium to deal with the situation.