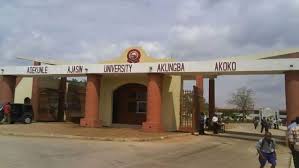 THE management of the Adekunle Ajasin University, Akungba, Akoko, Ondo State, has said it would investigate the allegation that some members of staff of the institution were fond of demanding bribes before attending to postgraduate students of the university.

The VARSITY   Alumni Association had alleged that some employees of the institution would always demand a specific number of wraps of pounded yam with soup, crates of soft drinks, bitter kola, packets of biscuits, and sweets before attending postgraduate students who wanted to defend their Ph.D. thesis.

Members of the association were said to have made the allegation at the 2020 Delegate Assembly held on the campus of the institution.

Prof. Olugbenga Ige, the acting Vice-Chancellor of the university, who was represented at the event by Prof. Victor Olumekun, described the alleged action of the concerned staff as shameful and would not be tolerated in the university.

Ige,   said, “I want to apologize to you and to everyone who has had reasons to be so aggrieved about the treatment they have received from our staff in the university.”