A WOMAN STABS LOVER TO DEATH OVER ABORTION DISAGREEMENT IN ANAMBRA 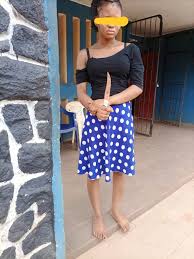 A woman, identified as  Onyinye Chime, who is aged  25-year  has stabbed her lover, whose name is Eleyi Azubuike, in Anambra State, for requesting she undergoes an abortion to terminate their unborn baby.

Newsnaija gathered that the incident happened on Ochiagha Street, Nkpor, near Onitsha, in the Idemili Local Government Area of the state.

It was learned that the victim had advised his lover, Chime to abort the pregnancy, which she objected to.

It was further gathered that the 29-year-old victim also refused to give her money for upkeep.

A source name withheld said, “Onyinye was not comfortable with all these and she complained to people about it nobody knew she would act this way, adding that She went to the extreme,”.

“Police detectives from the  Ogidi division rushed to the scene and immediately took the victim, who was found in a pool of blood, to Iyi Enu Mission Hospital, Ogidi, for medical attention, where he was confirmed dead by a medical doctor.

The corpse was deposited at the hospital’s mortuary for an autopsy.

“An observation of the deceased’s body showed stab wounds on his chest,  while a bloodstained kitchen knife was recovered at the scene.

“Preliminary investigation discovered that the victim impregnated the suspect and wanted an abortion, which she refused and requested some money for her upkeep, which the victim refused to give her which ended up in she stabbing him to death.

He said the case was under investigation to uncover other events surrounding the incident.