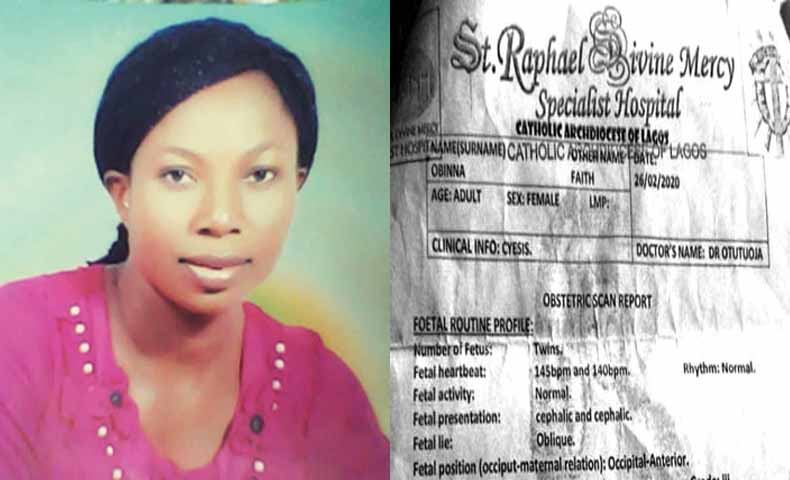 A mother of four, identified as Precious Caleb, has accused a hospital in Port Harcourt, the Rivers State capital, of stealing one of her twin babies after she was delivered of the two kids at the facility, urging them to return the second child.

The woman, while speaking to our source in Port Harcourt on Thursday, said she ran a scan at the said hospital which showed that it was twin, but alleged that she was neither shown the scan result nor shown the sexes of the twin.

Caleb  expressed shocked that the hospital later put a call across to her husband that she gave birth to only one baby (a boy), whereas she saw two of her babies after she was delivered of them.

She said “From the hospital, I went to deliver, I ran a scan there and the result showed it is a twin. In the operation room, I saw the two babies.

“But they didn’t even show me the sex of the babies. All of a sudden, they called my husband and said it was only one baby and a boy. Ever since I did that scan, they refuse to give me the result of the scan even when I demanded it,”.

The mother of four expressed sadness with the manner the police were handling the case, two months after she had reported the matter, appealing with the police to help her retrieve the second child.

The woman said “We took the matter to the police station at Rumuokpakani (Obio/Akpor LGA) where the police said they had the scan result which they showed my husband. But the policeman still refused to give it to us.

“From there, we moved the matter to the State Criminal Investigation Department because we thought the division could not handle it. But even there  I sensed some kind of game. This has led me to this point where I am,”.

Nnamdi Omoni, The Police Public Relations Officer of the  Rivers State Police Command, however, advised the woman to be patient, saying, “Investigation cannot be done at her own pace.

He stated that  It is at the pace of the team doing the investigation because they have a lot of things to do in the circumstance.