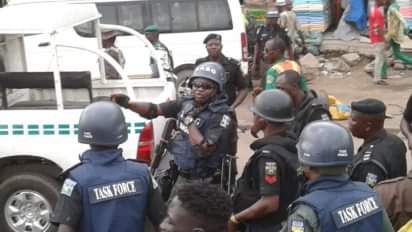 Ondo State Police Command has arrested a suspected armed robber and kidnapper, who escaped from Gombe State after an operation.

According to the police, the suspect belongs to a notorious gang, which specializes in kidnapping robbery and in the northern part of the country.

Mr.  Bolaji Salami, The state Commissioner of Police, who announced this in Akure, said the command would ensure that Ondo State remained too hot for kidnappers and other criminals.

The commissioner who did not make known the identity of the suspect stated that he was arrested in Ore, Odigbo Local Government Area of the state.

Salami, said, “On interrogation, the suspect said he and his gang sometime this month robbed a Hummer bus with number plate Gombe NFD 591 XA, kidnapped its driver and motor boy in Gombe State.

“The suspect further said in a bid to run away from Gombe State after the operation, they repainted the bus, fixed it with a forged number plate, Kogi XA 451 AN, and headed for the south-western part of the country, thinking that nobody would trace him and the loot.”

The police commissioner stated the suspect arrest was made possible by intelligence gathering and information supplied by residents of the state.

HE also stated that he had ordered his men to comb every part of the state, including the forests, to ensure that the abductors of two persons in Ikun-Oba Akoko on Saturday were apprehended and brought to justice.