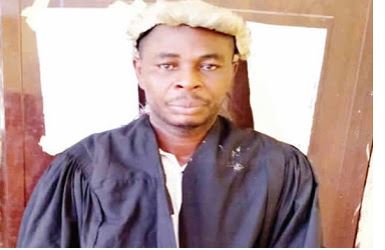 An Ogun State Chief Magistrates’ Court sitting in Itori, Ewekoro Local Government Area of the state has sentenced one Oluwagbenga Adedeji, to three years in prison for acting as a lawyer.

It was learned the fake lawyer was arrested on the court premises last week Wednesday when he appeared as a counsel for a client.

The convict was arraigned before Chief Magistrate B. A. Somorin on Thursday on one count of unlawful and illegal appearance as a lawyer.

The convict had first pleaded not guilty but later changed his plea to guilty when he was confronted with the evidence.

The Chief Magistrate in his ruling sentenced him to three years imprisonment with hard labour without an option of fine.

It gathered his arrest was made during a court session as his conduct was not in line with that of someone called to the bar, which was noticed by the magistrate himself.

He was afterwards detained at the Ewekoro Police Station, from where he was transferred to the State Criminal Investigation and Intelligence Department for prosecution.