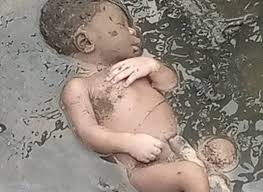 A 32-year-old man, identified as Muyiwa Ayorinde, was almost beaten to death at the Oke Aro area of Akure, Ondo State capital, for dumping his own baby inside a canal in the area.

Ayorinde was said to have kept the baby inside a black bag and thrown him inside the canal. He was, however, caught by the residents of the area who later handed him over to the police.

A source who narrated the story said it was the cry of the baby inside the bag that attracted people who were then monitoring the suspect’s movement.

In his statement he said, “I saw the young man looking strange as he came down from an okada) and pulled out a black bag and dropped it inside the canal and we heard a baby crying aloud. That was when we knew what he wanted to do. People usually come from different places to dump things in this canal and we have to make it a point of duty to stop them.

The source said “The man is a wicked man to have come to the carnal to dump his own baby. Thank God for the swift intervention of the security men who came around he  would have been  killed by those who saw his action and became angry.”

According to the source, the baby was later admitted to a nearby hospital, where a doctor confirmed that he had died.

Meanwhile,  Mr. Tee-Leo Ikoro, The state Police Public Relations Officer, said he was yet to be briefed about the incident.