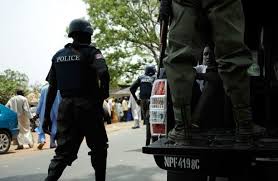 Kano State Command of the Nigeria Police Force has arrested a grandfather, his son, and grandchild over the killing of a man alleged to be a kidnapper.

NEWSNAIJA learned their arrest was confirmed on Tuesday night in a statement by the State Police Spokesman Abdullahi yawa.

The police spokesman revealed that the culprits, Adamu Musa, 50 (the grandfather); Sule Mallam (his son) and Isyaku Sule (grandson) were arrested for allegedly responsible for the death of one Kabiru Ya’u and his daughter Harira Kabiru in Gomo Village, Sumaila Local Government Area of the state.