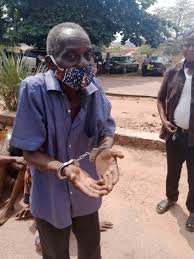 A 72-year-old pastor of an orthodox church, identified as Jimi Odunayo, has been arrested by the Oyo State Police Command for allegedly defiling a 13-year-old girl in the Monatan area of Ibadan.

Mrs. Ngozi Onadeko, the Oyo state Commissioner of Police, said this at a press briefing on Thursday.

The CP said the victim used to go to the suspect’s room to watch television, adding that he took advantage of the situation and defiled her.

she said, “On January 30, 2021, around 9 pm, a  teenage girl confessed to her father that one Jimi Odunayo, 72, a pastor of the Cherubim and Seraphim Church, Oke-Aseyori, on Adewale Street, Iyana Church, Monatan, Ibadan, had been having unlawful carnal knowledge of her from 2019 till June 2020.

“The suspect and the parents of the victim live within the same compound and the victim used to go to the living room of the suspect to watch television. Consequently, the suspect took advantage of the situation to have unlawful carnal knowledge of her on four occasions.

“The suspect made confessional statement to that effect, admitting that the allegation was true. The case was transferred to the State CID Iyaganku, Ibadan.”