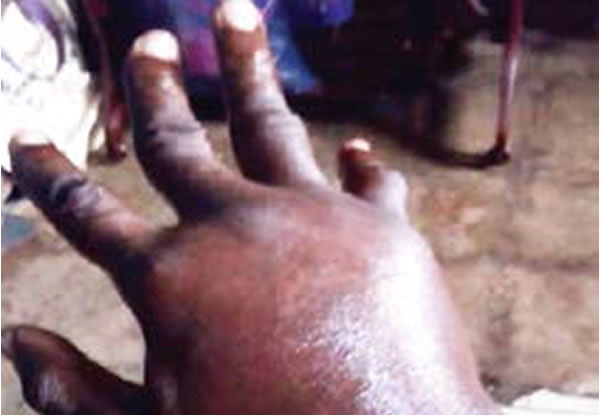 A 62-year-old man identified as  Paul Okedare, and his wife, Funke, are in pain after a co-tenant, identified simply as Tunde, allegedly brutalized them at their residence on Unity Street, in the Ikotun area of Lagos State.

NEWSNAIJA learned that Tunde, a welder, had a disagreement with the couple which enclosed 62his inability to pay his share of the house electricity bill.

Our source gathered that Funke was in the kitchen preparing food for her 62-year-old husband when she went to the corridor to fetch water from a drum.

While fetching the water, Tunde, who was also fetching water from his drum, allegedly splashed water on the woman.

Paul told our source t that this led to an argument, claiming that the suspect beat up his wife.

He claimed that when he attempted to intervene, Tunde brutalized him as well.

He said “I asked him what happened and he attacked on me until our co-tenants separated us. He rained curses on me and my wife. After people mediated, he passed the other side of the building to meet me and used an iron rod to hit me on the hand and chest. I was on my way to thank our co-tenants for intervening when he started attacking me again. I sustained serious injuries,”.

Paul said Tunde was angry that he did not support him when tenants met regarding the electricity bill.