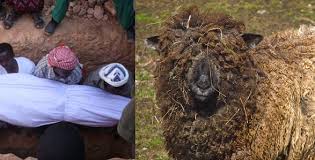 A 55-year-old man, identified as Abdulhamid Muhammad, has lost his life after falling into a well.

Newsnaija learned that the incident happened in Sha’iskawa village, in the Dambatta Local Government Area of Kano State, when Muhammad was trying to rescue his sheep which was trapped in the well.

Muhammed said the victim was rescued and rushed to the Dambatta General Hospital, where he was announced dead.

According to the spokesman, the Dambatta Fire Service Station received a distress call on the matter around 4.37 am from one Ummi Muhammad in Sha’iskawa village.

Muhammed said, “After receiving the information, we dispatched our team, who discovered that it was a 55-year-old man, Abdulhamid Muhammad, who fell inside a well.

“The incident occurred while he was trying to rescue his sheep that fell into the well. After rescuing the victim, we took him to the Dambatta General Hospital, where he was confirmed dead by the doctor on duty.”