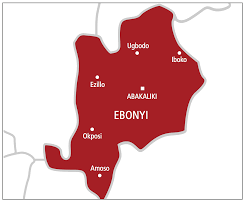 The Ebonyi State Police Command has arraigned a managed 39 identified as Mboyi Eche, for allegedly raping his sister-in-law who is aged 15 on Wednesday.

Newsnaija gathered, that the suspect is married to the 15-year-old victim’s elder sister and on September 30, 2020, went to the farm with her, where he allegedly had sex with her and promised to divorce his wife in order to marry the victim.

It was gathered that Eche made the victim enter into a blood covenant with him and threatened that she would die if she ever let anyone know what transpired between them.

Luck, however, ran out of the suspect, when his wife, who had gone out to buy food condiments at a nearby village market, returned home and found Eche fondling her sister’s breasts.

Newsnaija learned that the suspect committed the crime on October 3, 2020, at Odeligbo village, Amagu community, in the Ikwo Local Government Area of the state.

He was arraigned on Wednesday before a magistrates’ court on one count of unlawful sexual intercourse.

ASP Mathias Eze, The police prosecutor, told the court that the offence was punishable under Section 34 (2) of the Ebonyi State Child Right Law and Related Matters, 2010.

The charge read, “That you, Mboyi Eche, 37, on the 3rd day of October 2020, around 2 pm, in Odeligbo, Amagu-Ikwo Local Government Area, in the Abakaliki Magisterial District, had unlawful sexual intercourse with your 15-year-old sister-in-law, thereby committing an offense punishable under Section 34 (2) of the Ebonyi State Child Right Law and Related Matters, 2010.”

The suspect who was not represented in court by a lawyer confessed to the crime.

The suspect said, “I did it. I love her even though I’m married to her elder sister. Her sister is not doing me good and so, I want to marry her because she is better than her sister. I don’t care whatever you call it, whether rape or a real affair.

“But the truth is that I love her and we had been having sex all this while. The one that took place on October 3, 2020, was just the last. I love her because she is better than her sister and that’s why I want to marry her. She gives me joy.”

Mrs. Nnenna Onuoha, The Chief Magistrate, said the court lacked the jurisdiction to adjudicate on the matter and directed that the suspect be remanded in the Nigerian Correctional Centre, Abakaliki, while the case file should be transferred to the office of the Director of Public Prosecutions in the state for necessary legal action.

Onuoha,  adjourned the matter till October 23, 2020, for the report of compliance.