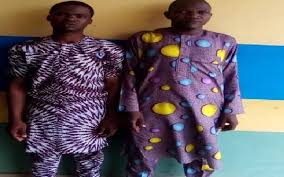 A 38-year-old man known as, Ismaila Saheed an Arabic and Islamic teacher has allegedly raped his 15-year-old pupil after she complained to him of being raped by another man  aged 20.

According to the police, Saheed took advantage of the victim who went to his house to complain of being raped by a 20-year-old  identified as Toliha Sabith the same day.

Abimbola Oyeyemi, The state Police Public Relations Officer, made this in a statement on Monday.

The PPRO   said the duo committed the offense last Tuesday at the Imedu-nla area of Mowe, in the Obafemi-Owode Local Government Area of the state.

He said the two men were arrested after the victim reported the incident at the Redeemed Camp Police Station.

Oyeyemi in his statement said, “The suspects were arrested following a report of their evil acts by the victim at the Redeemed Camp Police Station. She said Toliha Sabith forcefully had carnal knowledge of her on August 25, 2020, at the Imedu Nla area of Mowe, and she went to her Arabic and Islamic teacher to inform him.

The Arabic teacher, Ismaila Saheed, “Having listened to her ordeal, told her that she might have got pregnant as a result of the incident and offered to help her remove the said pregnancy.

“But instead of removing the claimed pregnancy, he had carnal knowledge of her, after which he inserted a sharp object into her private parts, causing her a serious vaginal injury.

“Upon the report, SP Bala Yakubu,   the DPO Redeemed Camp division mobilized his detectives to go after the two suspects and they were both arrested on August 28, 2020, which after interrogation they have confessed to the crime.”

Oyeyemi said the victim has been admitted to a hospital for proper medical attention.

The DPO  said  Edward Ajogun, the state Commissioner of Police, had directed that the two suspects be transferred to the Anti-Human Trafficking and Child Labour Unit of the State Criminal Investigation and Intelligence Department for further investigation and prosecution.

“The CP, therefore, urged parents to always show concern about the wellbeing of their children, especially the female ones, so as not to make them easy prey for predators in human skin,”.