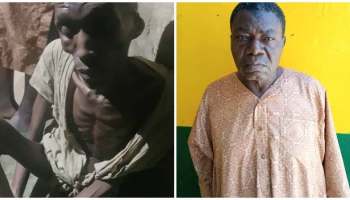 The Kano State police have rescued another man, identified as Ibrahim Lawan, who was allegedly held captive for 15 years by his father at Skeka quarters in Kano metropolis.

Lawan, Thirty-five -year old was said to have been locked up in captivity since when he was 20-years-old.

A video clip circulating showed how policemen in the state tool the man out on a stretcher from an uncompleted apartment into a waiting ambulance to an undisclosed hospital for medical attention.

The rescue of the 35-year-old came barely four days after one 30-year-old known as Ahmed Aminu, allegedly held in a car garage by his father, Aminu Farawa, was rescued by the police.

There was no official statement from the police. As of the time of filing in this report,

DSP Abdullahi Haruna,  as The state Police Public Relations Officer, could not be reached on the telephone.