A 26 YEAR OLD WOMAN, BRUTALIZED, RAPED BY A MOTORCYCLIST IN DELTA STATE 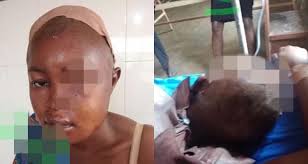 A 26-year-old woman identified as Nwamaka Nwaolie has been allegedly raped by a motorcyclist, in the Aniocha North Local Government Area of Delta State.

Newsnaija learned that the Nwamaka on her way to church on Sunday boarded the motorcycle.

A community source according to the report said that the rider suddenly changed his direction and carried the victim into a bush in Idumuine quarters, Isselu-Uku.

He was reported to have brutalized and raped her.

“The man used a plank and a cutlass to beat her till she almost died, after which he raped and left her in the bush.

“The victim was, however, rescued by the Isselu-Uku vigilantes and rushed to the community hospital, after which she was transferred to the Federal Medical Centre, Asaba.

the source said, “the victim was found in a critical condition in the bush by the vigilantes”.