A 16 YEAR OLD STUDENT ARRESTED WITH GUN IN ANAMBRA 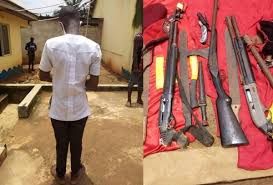 A 16-year-old  schoolboy has been arrested with a double-barrelled gun inside a school in Igboukwu Anambra State.

Haruna Mohammed, The Police Public Relations Officer in the state, made this in a statement on Monday.

Mohammed said the boy was among the 80 suspected cultists that were arrested during a raid on various criminal hideouts and black spots across the state.

The PPRO   stated that 40 of the suspects had been charged, 15 screened and released unconditionally, five placed under police supervision for being underage, while 20 were undergoing investigation.

The command thanked residents of the community for providing useful information and reassured the public of adequate protection.