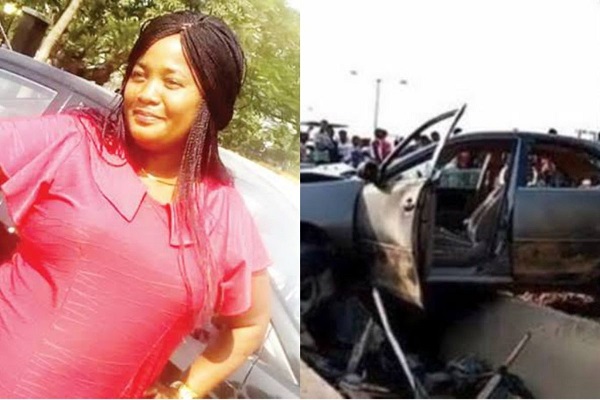 A 16-year-old boy testing his driving skills with his mother’s car at the Arena Shopping Mall, Oshodi, Lagos State, has killed one Mrs. Tuale Iwejim.

It was gathered that the victim, was walking to where she was to buy goods for her shop when she was knocked down by the Sports Utility Vehicle.

It was learned that while the teenager struggled with the car, he was said to have put it in reverse and hit the 50-year-old in just a second time.

The 50-year-old woman was rushed to the Lagos University Teaching Hospital, Idi Araba, Surulere, where she had surgery before her death on Thursday, September 4, 2020.

The deceased’s husband, Christopher Iwejim, told our source that his wife suffered life-threatening injuries from the accident.

Iwejim,  said, “We were told that the boy and his mother went to the market to buy some things. After they did, the woman asked the son to wait for her in the car so that she could go and pack the remaining items.

“While the boy was inside the car, somebody shouted that the vehicle was obstructing traffic and asked the occupant to park well. Instead of him to say he was not the driver, he took the key from the mother’s bag and started driving.

“He managed to engage the gear on a drive, but forgot to use the brake. That was how he hit Tuale. While struggling to put it on the reverse, he hit her again. She sustained what I will call first degree injuries on both legs from her waist down. The boy also damaged some billboards and structures in the market.”

Our source gathered that the N400,000, which the Delta State indigene borrowed to buy goods in the market, was stolen while she was being disengaged from the wreckage.

Christopher noted that his wife was taken to a private hospital in the area, from where she was referred to LUTH.

Also, the deceased son, Amos, said his mother spent about three weeks at the hospital, where doctors battled to save her life.

He said “When the accident happened, she was stuck in a gas cylinder, and when they tried to remove her, some parts of her flesh got torn. Her hip bone was divided from her body. It also appeared like there were iron rods in her leg and there was a hole in the leg,”.

It was learned that as the medical expenses piled up, the victim’s family sought an agreement with the boy’s family for a 50-50 sharing formula.

However, the boy’s mother, identified as Victoria Ogunleye, was said to have shown up at the hospital twice with N100, 000 on each occasion.

The family was said to have spent close to N1.5m.

Amos said he was surprised that while his mother was in the hospital, the military police released the vehicle to the Ogunleyes.

He said, “The military police called my dad and said the woman wanted to pick her vehicle, and he told them not to release it. But to our surprise, they released the vehicle to the family.

“LUTH later said they wanted to perform a surgery on her. A day after the surgery, she became unstable and they called my dad to ask if he could afford the ICU because her breathing was not good. He agreed. They put her there, but she passed away the third day.”

The deceased’s son faulted the management of the hospital for not handling his mother’s condition properly, wondering how the case got complicated and led to her death.

Our source gathered that some representatives of the Ogunleye family had a meeting with the deceased’s family on Sunday and Wednesday.

The Iwejims were said to have demanded that the boy’s family bear the cost of burial and fulfill the agreement to share the medical cost by 50 percent.

The deceased’s husband lamented that the military police made no arrests and were more concerned about their damaged facilities.

Meanwhile, when the boy’s mother was contacted she declined to comment, saying she was busy.

Captain Fidelis Ekwote, a senior official of the military police, also declined comment when our source asked about the alleged release of the vehicle involved in the accident.

Ekwote said “Come to the military police officer in Ikeja cantonment. When you get there, you will get the facts. Ask for me or Captain Lawal,”.