Chaos in court as Onnoghen’s witness comes to court with written Expo. 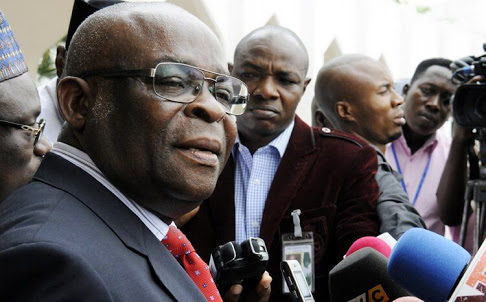 There was mild drama at the code of conduct tribunal in Abuja this morning when lanre Busari, the 1st witness for the suspended CJN, Walter Onnoghen was found with already prepared answers in a piece of paper populary called “expo”

The Chief Justice is standing trial over allegations of fraudulent declarations of assests.

At the resumed hearing of the case today April 1st,2019 Onnnoghen opened his defence and his lawyers called in one of his witnesses, Lawal Busari His official driver who took the oath and entered the box.

During the cross-examination,Busari answered all the questions he was been asked by the defence counsel.

Howerver, when Aliyu Umar, the prosecution counsel, asked him to hand over the paper in his hand to Danladi Umar, the CCT chairman, it was discovered that the paper contained written answers to questions of the defence counsel

The court, therefore, admitted the script found on the witness as an exhibit.

The matter was adjourned till Wednesday April 3rd