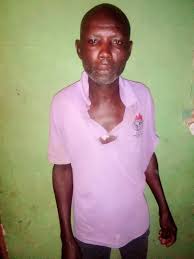 A 56-year-old man, identified as  Remi Oladiti, who paraded himself as a lawyer, has been apprehended for the alleged defilement of a 14-year-old girl.

The CP who confirmed the accident said the victim was found to be some months pregnant after medical examination.

The police boss said the victim was running an errand when Oladiti allegedly approached her and gave a drink fixed with a sedative.

The girl was said to have become unconscious after taking the soft drink.

The CP said, “Following her comatose state, Remi Oladiti, who had already made a confessional statement, forcefully had unlawful carnal knowledge of her.

“On regaining consciousness, she found herself fully unclothed on Remi Oladiti’s bed, while blood was dripping out from her private parts. The suspect made a confessional statement to the fact that he had carnal knowledge of her but denied giving her anything to drink. Medical examination revealed that the victim was already 29 weeks and one day old pregnant.”

Oladiti told journalists he did not force the victim, who he said told him she was 18 years old.