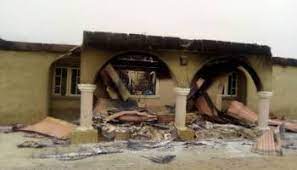 A man identified as Alhaji Taiye-Hassan Beki, a technician aged 52 has lost his life when part of his building collapsed on him during a rainfall that was accompanied by storms in Ilorin, Kwara State, on Monday.

NEWS NAIJA   gathered that the incident happened at the Beki family compound in the Alanamu area of the Ilorin West Local Government Area of the state.

It was further learned that the victim, a father of four, was urinating at the back of the building when a part of the mud house suddenly fell on him.

NEWS NAIJA gathered that the 52-year-old has been trapped under the rubble for several minutes before he was rescued by sympathizers, who were mostly members of his family.

The victim, who sustained injuries and lost consciousness, was immediately rushed to the University of Ilorin Teaching Hospital, where he passed away on Tuesday.

Meanwhile, the deceased was buried at the Muslim Cemetery, llorin, after the Janazah prayer organized by his family and attended by some sympathizers.

The Magaji of the Beki compound, Alhaji Yahaya Olowo-Beki, described the incident as an act of God.

Both the state fire service and the state police command said that they were not aware of the incident.

Mallam Hassan Adekunle,  the  Head, Media and Publicity, Kwara State Fire Service, said the agency was not called for any rescue operation, while Ajayi Okasanmi,   the Police Public Relations Officer in the state, said that the incident was not reported.

However, a member of the family, identified as Abdulfatai Beki, who works with the News Agency of Nigeria, confirmed the incident to our source described the incident as unfortunate, adding that sympathizers had been trooping into the compound to commiserate with the family over their loss.