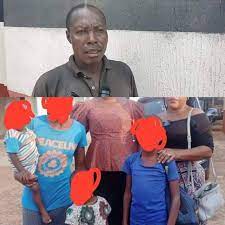 The Nigeria Security and Civil Defence Corps in Anambra State has on  Thursday paraded a 48-year-old man,  identified as Thomas Igbo, for allegedly defiling his three daughters.

The Enugu State indigene, who resided in Enugwu-Ukwu, in the Njikoka Local Government Area of Anambra State with his wife and four kids, was said to have sexually abused the three female children aged eight years, four years and 18 months.

Igbo, who admitted to abusing his eldest daughter, however, denied molesting the remaining two, blaming his action on alcohol.

NEWS NAIJA learned that one of his daughters revealed the molestation to a neighbour, who reported the matter to a human rights group, Child Protection Network, which facilitated the arrest.

The neighbour said, “A hospital in Enugwu-Ukwu confirmed that the three children were severally molested”.

Mrs Okwuchukwu Chukwuenyem, a  spokesperson for the Child Protection Network, said the case was brought to her knowledge after the neighbour noticed the “despicable behaviour” of the man.

She said, “What made the neighbour raised eyebrows was the day the man asked one of the daughters in Pidgin English, ‘e sweet?’ to the neighbour’s hearing.”

David Billie,  the state Commandant of the NSCDC, while parading the suspect, said the investigation had begun into the matter.

He said Igbo would be arraigned when judiciary workers, who were on strike, resumed.

Billie described the act as painful, urging parents to be more responsible in taking care of their children.