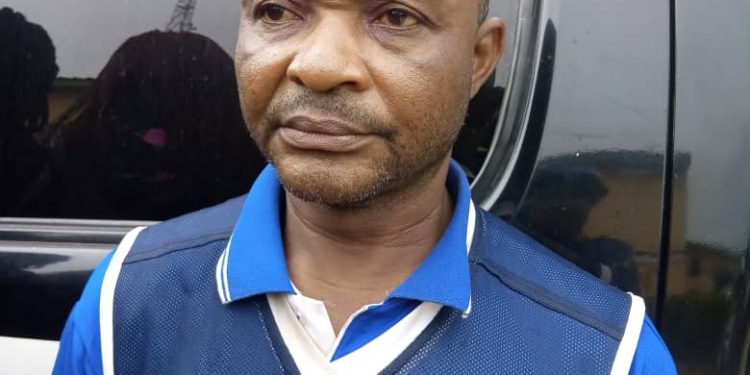 The gender-based unit of the Nigeria Security and Civil Defence Corps,(NSCDC) Lagos Command, has arrested a 48-year-old man, identified as  Charles Ekwe, for allegedly defiling a 13-year-old-girl at No. 1B Surulere Street, Ojo, Lagos State.

Newsnaija gathered that the Charles started having sex with the victim, who is his wife’s niece, whenever his wife was away from the house and also inside his shop.

He also allegedly introduced the victim to pornography and threatened to kill her if she told anybody about the affair.

It was learned that Mrs. Blessing Ekwe, victim’s aunt, observed that something was wrong with her niece three weeks ago, she interrogated her and the victim opened up and told her that her husband has been sexually abusing her.

The Victim’s aunt said the 13 year old told her that she had lost count of how many times she had been abused by Charles, adding that when she took the victim to hospital for medical examination, it was confirmed that she had been defiled.

Meanwhile, Charles  insisted that he only touched the victim in her private parts and made her watch pornography items on his phone.

Mr Paul Ayeni, The Commandant, NSCDC, Lagos, said the suspect would be handed over to the appropriate agency for further investigation and persecution.

The NSCDC Commandant said “This is a punishable crime and those caught in  such, act will be punished severally”

She  said, the  suspect will face the full wrath of the law and will be handed over to the appropriate agency for further investigation and persecution,”.