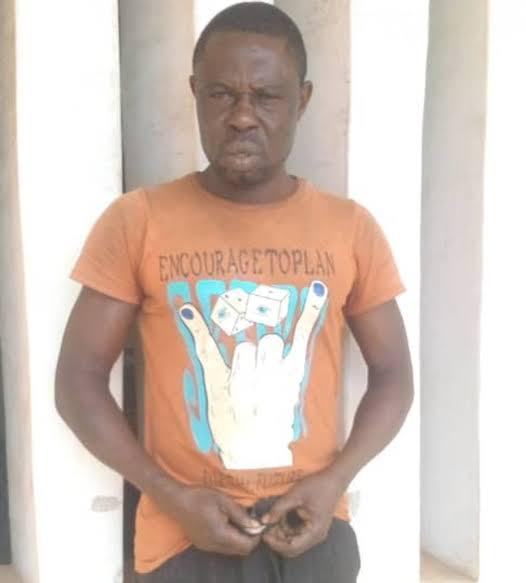 A 45-year-old man  identified as  Olaoluwa Jimoh, have been arrested by the men of the Ogun state police command for allegedly impregnating his own biological daughter who is aged 19 year old.

NEWSNAIJA learned  the Suspect was arrested following a complaint by the victim that her father usually harass her and eventually got her pregnant.

DSP Abimbola Oyeyemi, the State Police Public Relations Officer, revealed  this in a statement on Monday.

According to the PPRO, The culprit was arrested  after the victim filed a report with the Ode-Remo divisional headquarters.

“The victim told the police that her mother had divorced her father a long time ago and that she had been living with her mother until the suspect invited her to stay with him about two years ago.

”When she found out she was pregnant, she opted to report, despite her father’s threats. Following the report, CSP Fasogbon Olayemi, DPO, Ode Remo division, immediately  dispatched his detectives to track down the offender, who was promptly arrested.

The suspect confessed to the act but claimed that he was influence by the devil during interrogation.”

Meanwhile, Edward Ajogun, the Commissioner of Police has ordered the immediate transfer of the case to the State Criminal Investigation and Intelligence Department for further investigation.