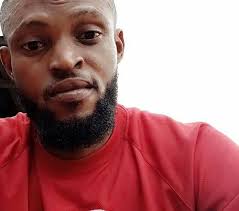 45-year old married man, identified as Ikezota Ebere, of Osungbesan Street, Ejigbo area of Lagos, has been arrested for faking his death after engaging in sex and obtaining the sum of N760, 000 from a single mother, known as Abi Tina, under the false pretense that he will get married to her.
NEWSNAIJA learned that the suspect, Ebere, met Tina at her shop on Fayemi Street in Ejigbo. In the course of their discussion, he told her that he got married 10 years ago, had no children from his wife, had divorced her and since then had remained single.
He was able to convince the single mum , who was also married and had children before she separated from her husband, for both of them to get married. Tina reportedly fell into the trap and accepted his proposal.
Ebere then told her to sell all the goods in her shop, which she did and handed all the money to him in order to rent another shop in Orile area of Lagos, where he lied he got an accommodation.
Ebere was said to have called her family and informed them that he was coming to pay Tina’s bride price sometime in March, 2021 and that they should get ready for the ceremony.
Tina then traveled to her place in Delta State and waited for Ebere to come with his family as they had agreed.
However, few days to the agreed date, Tina received a call from a voice, who identified himself as Dr. Kingsley and told her that Ebere had serious accident at Ijebu Ode and died in the process and his corpse had been taken to his village in Ehime Mbano, where he was buried.
While Tina was still mourning her misfortune, the supposed dead man, Ebere, called telling her that he had an accident and was in coma. At that point, she told him that one Dr Kingsley had called and said he had been buried in his village. Immediately, he switched off his phone and disconnected every contact with her.
Tina later came back to Lagos in frustration and started trailing him. She went to Leadway Assurance Company at Iponri area of Lagos, where he told her he was working and eventually caught him.
The matter was reported to the Police at Ejigbo Division; Ebere was arrested and detained at the station for interrogation.
In the course of the interrogation, it was revealed that Ebere had a wife and four children including a grown up one among the children.
Having been found guilty, he was charged before the Ejigbo Magistrates Court for fraud.
but the 45 year old man pleaded not guilty.
The prosecutor, Inspector Benedict Aigbokhan, asked the Court to give a short date since he pleaded not guilty to enable the Police prove that he actually committed the alleged offence.
The Presiding Magistrate, A.S. Okubule, granted him bail in the sum of N300,000 with two sureties in like sum, who must show evidence of tax payment.
He was remanded in Correctional Centre at Kirikiri town, Lagos, pending when he will perfect his bail conditions while the matter was adjourned till 4th November, 2021, for mention.