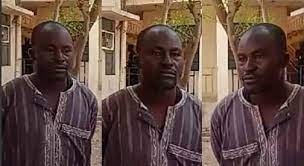 The Kaduna State Police Command has arrested a man, identified as Muhammadu Aliyu, for allegedly sodomizing a boy in the Kaduna metropolitan area of the state.

In footage posted on Channels TV’s Instagram handle and monitored by NEWSNAIJA Isah was heard saying the 41-year-old suspect was arrested through information received by the command about Aliyu’s alleged specialization in sexually molesting minors.

The PPRO said, “On May 10, 2021, around 9 pm, the command succeeded in arresting one Muhammadu Aliyu, 41, of the Kaduna metropolitan area. He is a serial rapist, who specializes in molesting minors.

Aliyu confessed to having sexually molested the boy on four different occasions.