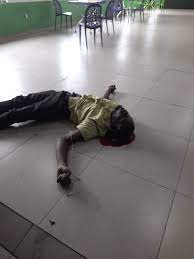 There is panic in Rivers State University following the killing of a 400-level student of the institution.

The victim, whose name could not be known was a student in the Engineering Faculty of the university.

He was reportedly shot dead at a canteen within the premises of the Management Science where he went to spend some time with friends.

A source, who spoke in confidence, disclosed alleged that a 200-level student from the Management Department was among the suspects that killed the victim.

He said the victim was shot in the head, adding that the incident happened at  around 9am today .

He said that the killers were attempting to escape from the crime scene before security operatives arrested the suspect. Known as Mike Odiegwu,

Nnamdi Omoni, the Public Relations Officer Rivers State Police Command, confirmed the incident and a manhunt has been launched  the suspects on the run..