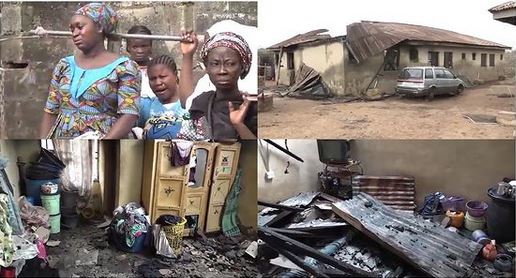 A woman identified as Mrs. Titilayo Adigun, aged 40-year-old, a petty trader, and her four children were burnt to death in their place of residence in the Tanke area of Ilorin, Kwara State, on Wednesday.

NEWSNAIJA learned that the incident happened in the Ifesowapo community behind the ‘F’ Division Police Station, Tanke, and Ilorin.

It was learned that the incident happened around 10 pm when a lighted candle fell and fire consumed the room in which the family members were sleeping.

Mrs. Titilayo Adigun,  died alongside four of her children in the inferno, while her husband, Fatai, is currently on admission at the University of Ilorin Teaching Hospital as a result of shock.

The landlord of the house, identified  Ibrahim Gana, who was injured after saving the only surviving child of the family, appealed to the state government to assist them, especially the only survivor, who is presently receiving treatment at the UITH.

Gana stated, “The incident occurred around 10 pm last night and we tried our best to save them, but we were only able to save one of the children from the fire.

The four siblings and their mother were burnt to death. We had to contact the father, who was out during the incident, on the phone and he is now in the hospital.

“We are appealing to the government and all kind-hearted Nigerians to come to our aid.”