40 YEAR OLD WOMAN ARRESTED FOR SELLING STOLEN BABY TO A COUPLE FOR 900,000 IN LAGOS 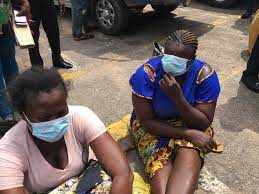 Hakeem Odumosu, the  Lagos State Commissioner of Police, has arrested a 40-year-old woman identified as  Chinyere Okechukwu who allegedly sold a five-month-old baby to a couple, identified as Paul and Happiness Ibebuilo, for N900,000 in the Iyana-Iba area of the state.

NEWSNAIJA learned that the mother of the baby, Onyechukwu Okafor, who is aged 20, reported at the Satellite Division on March 19, that her baby was forcefully taken away by one 40, and sold for N900, 000 to one Happiness Ibebuilo, adding that the police swung into action and moved to the house of one Paul Ibebuilo, who is aged 45, in whose custody the stolen child was recovered.

The Commissioner of Police said an investigation is currently ongoing.