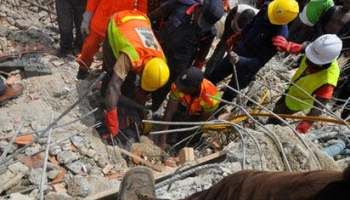 Office of the Pu’er municipal government today has announced that four workers have been rescued 47 hours after a railway tunnel collapsed at a construction site.

According to the office of the Pu’er municipal government, more than 300 personnel from emergency management, public security, and firefighting departments, among others, were involved in the rescue.

All four rescued workers have been sent to the hospital and are currently in a stable condition.