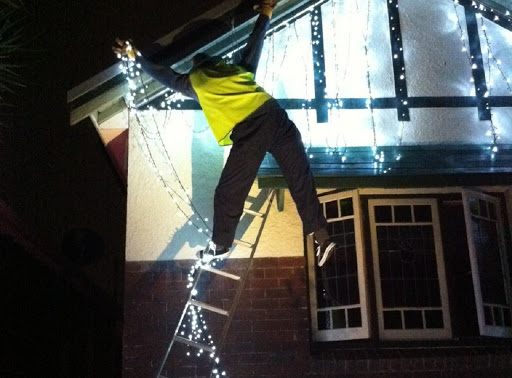 A 35-year-old man simply known as Jaja has been electrocuted by Christmas decorations fixed on the Nnebisi Road, Asaba, and Delta State.

The victim, popularly called Jaja, was said to have been engaged by the contractor to the Asaba Capital Territory Development Agency on beautification to dissemble the decorations when he was electrocuted and died on the spot on Monday.

An eyewitness and fellow worker told our source  that the victim was disconnecting the decorations when one of the wires on the street light poles fell and electrocuted him.

The eyewitness said “Jaja climbed the pole with a metal ladder to disconnect the street light. One of the wires suddenly snapped and touched the ladder he was standing on and he was electrocuted,” .

The street lights were initially powered by generators during former governor Emmanuel Uduaghan’s administration, but were connected to the national grid in 2015 by Governor Ifeanyi Okowa.

A source, who wept  that the disconnection crew could not rescue the victim, who died on the spot, said the corpse was deposited in the morgue of the Federal Medical Centre, Asaba.

Onome Onovwakpoyeya, the Police Public Relations Officer in the state, when contacted  said the case had not been reported at any police division in Asaba.