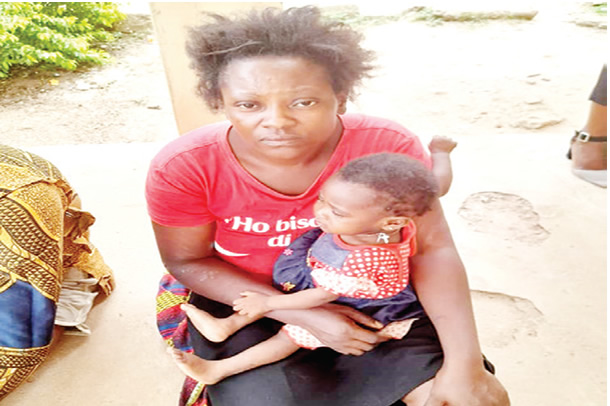 A 30-year-old woman identified as Blessing Jimoh has been arrested by the personnel of the Ondo State Police Command for allegedly killing her mother, known as  Mrs. Ijeoma Odo.

Blessing, who was paraded at the police headquarters, Akure, on Monday, confessed that she killed her mother with a cutlass after a pastor told her that she was a witch and was behind her misfortune.

NEWSNAIJA gathered that the mother of four from Enugu State allegedly committed the crime while she and the victim were working on a farm at Ile Oluji in the Ile Oluji Oke Igbo Local Government Area of the state.

She also claimed to have committed the act because her mother was allegedly responsible for her mental illness.

Blessing in her statement said, “My pastor told me that my mother was a witch that she was the one behind my insanity.

“So, after appealing to her and there were no changes, I had to kill her. I cut her neck with a cutlass. It was like something was wrong with me that made me kill my mother. I am not happy with what I did.”

Speaking on the incident, Mr. Bolaji Salami the state Commissioner of Police, said the suspect would soon be charged after the conclusion of the investigation.