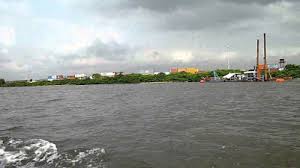 The Lagos State Magistrates’ Court in Yaba, on Wednesday,  has ordered the remanding of a fisherman, identified as Fatai Yussuf, aged 27 for allegedly drowning his six-week-old daughter in the lagoon.

NEWSNAIJA learned  Yussuf was alleged to have on December 27, 2020, taken the baby and his brother to the Ajanaku lagoon in the Badagry area of the state after their mother left the sick baby in his care.

Thomas Nurudeen,  the prosecutor, told the court that the defendant threw his daughter into the lagoon in the presence of his son and lied to his wife and his elder brother that he took her to the hospital.

Nurudeen added that when it was discovered that Yussuf had thrown the baby into the lagoon, his elder brother reported the incident at a police station.

Immediately Yussuf was arraigned on one count of murder but his plea was not taken by the court.

The offense was said to have contravened Section 222 and punishable under Section 223 of the Criminal Laws of Lagos State, 2015 (Revised).

The Chief Magistrate ordered the remand of the defendant in the Ikoyi Correctional Centre pending legal advice from the Directorate of Public Prosecutions.

He adjourned the matter till February 23.