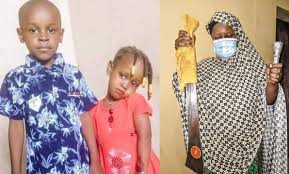 A 26-year-old housewife, known as Hauwa Habibu, has been arrested on Saturday by the Kano State Police Command for allegedly stabbing her two biological children to death in Kano.

DSP Abdullahi Kiyawa, the command’s spokesman, in a press statement, disclosed that on October 3, 2020, around 11.30 am, the police received information that Habibu, who lives in Diso quarters, Gwale Local Government Area of Kano, attacked and killed her two children, six-year-old Irfan Ibrahim, and three-year-old Zuhura Ibrahim.

According to the statement, Habu Sani,  the state Commissioner of Police, ordered a team of detectives to comb the metropolis and arrest the fleeing Habibu, within 24 hours.

the statement added ‘’A team of detectives instantly rushed to the scene and quickly carried the victims to the Murtala Muhammed Specialist Hospital, where the doctor on duty confirmed the two children dead, while the third victim was rushed to the Aminu Kano Teaching Hospital, where she was treated and discharged,’’.

Newsnaija gathered the police team arrested the suspect around 10.50 pm on the same day of the incident.

‘’On preliminary investigation, the suspect admitted to having locked up their house and used a machete and an aluminum-made pestle to attack the three helpless children, causing them severe bodily injuries in different parts of their body.

“Meanwhile, the Commissioner of Police has ordered the transfer of the case to the State Criminal Investigation Department for discreet investigation, while the suspect is still in the custody of the police,” the police spokesman said.

An online news platform, Sahara Reporters, while quoting a family source, alleged that the woman killed the children because her husband, Haruna Ibrahim, took a second wife.